The idea Factory, that is :). I’m just wrapping up the prototype knit for my third and final garment in the e-book that I hope will publish by the end of next week. Working title : Memories of the Nile and it will include the Cairo Cabled Reversible Scarf, Thebes Temple Fingerless Gloves and Papyrus Columns Reversible Cowl / Infinity Scarf.

I’m super excited to have been this productive, it’s been a long time since I’ve been able to dedicate this much time to design work and I’m loving it. The designs are themed, coordinate and the Cascade Venezia that I used for the prototypes is easily available, affordable and has great mileage. I really hope these will be as well received as “Les Cloches… ” was :).

This is a sneak peak at Papyrus Columns just before the final (quick and easy) seaming:
(Goth-stonian Legwarmers hiding in the background are almost finished too 🙂 ) 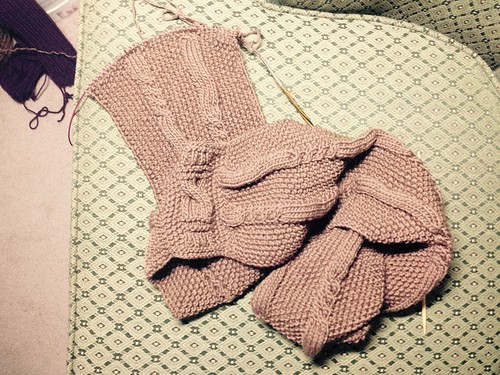