Finished up my “Aurora Borealis” Stole and happy with the result. I winged the gradient effect to use up two full skeins of Malabrigo Silkpaca and added slip stitch borders on the short ends. The beads are #5 Miyuki in an iridescent blue purple that picked up the tiny bit of purple in the “Azules” colourway.

This one was my project for Eat.Sleep.Knit’s “Star Stitch” KAL and I gotta say… those stars are pretty but they are about as fun as a Klingon fart in the transporter room to work for any length of time. My hands were not happy about this at all. Hopefully, some accumulated yardage points and a star for my team, the “Starsheep” will make it worthwhile in the end. The colours are typically hard to capture but links from my project page to the stash that I worked with are pretty good if you’re curious about the tones and depth of the colours; they are nice on this particular base. I found myself petting quite a bit! A sweater in the Silkpaca would be luxurious *sigh*A

My “Starburst” Hat is blocked too – love the balloon trick! It’s size Small, for a Littlie so no modelled photos.

Got a kick in the mojo since Wednesday – my beads finally arrived and so has spring.

I finished up my fourth project for National Crochet Month, ‘Starry Skies Stained Glass‘ afghan. This cleared out the last of some ancient stash and some never-to-be-finished projects. I actually hooked from a half completed vest at one point! Very happy with the results and debating to gift this or keep for my Moroccan, boho family room.

Time now to backtrack to my third project as the beads arrived late Friday afternoon. I think they’ll look pretty along the border. I chose Toho’s in ‘Metallic Cosmos’, 8/0’s to go with the Berroco Ultra Alpaca Fine in ‘Blueberry Mix’.

That’s it for now! Hope Monday is gentle with you and don’t forget – to celebrate National Crochet Month, all yarn in my Etsy shop ships free to Canada and USA!

She is off the hook and off the needles. “Skellina” is a blingy version of “Yorick” and technically another test knit. Note to self: take notes, SMH. I believe I’ve got it all down now and will get at some writing and tech editing.

This is another of my ©kindred knits & cohabiting crochet projects, combining filet mesh crochet in a motif form, with knitted lace work and ribbing. I invented a rib stitch to achieve the look of bones for Yorick… alas poor Karin! I knew notes not – apologies to Willy Shakespeare. All is recouped though and tweaked even, so that the Skellina version is “The One”.

I was iffy about using a yarn with acrylic – I totally own being a yarn snob – but this King Cole “Galaxy” just wouldn’t stop following my around my LYS the last time I went for a Sit ‘N Knit. I figured anything so sassy and insistent needed WIP’ing into shape. I actually love it… it is the tiniest bit splitty but you’d expect that with the paillette thread and in no way is this a disadvantage. The yarn is soft and shows the stitches well. What I really like is that the paillettes shine with rainbow hues, when light hits them. It’s like a two for one look and gives a perfect sugarskull or Día de Muertos look to the finished cowl.

The other WIP’s are coming along, that being a second “Filigree” and the resurrected third pair of “Goth-stonian” legwarmers. I found some beautiful Asian-motif beads in a lacquer red that’ll be perfect for this pair that I’m working in some black Cascade 220.

And now, back to the grind. Cheers All!

It must have been a warm day in Nunavut… I’ve gone finishing crazy. Making his FO debut is my “Ollie” – the Oliver Twist MKAL shawl. Worked to pattern (nupps and minimal beads), no mods and in the colourway “You Zig, I Zag” (you’ve got to pick a pocket or two boys) and with S/L chartreuse AB #6 beads. Ollie is huge and warm and totally my new boyfriend 😉 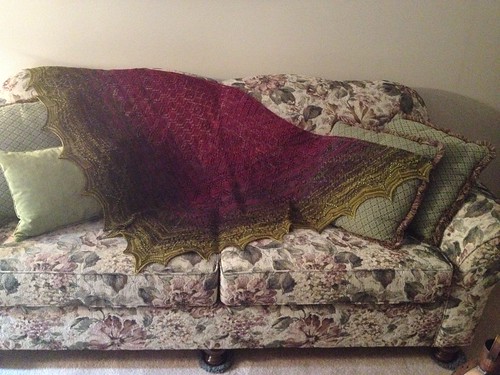 Putting the blocks to “Ollie” 😉 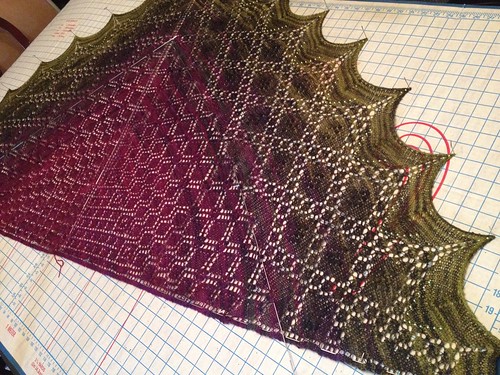 When did I turn into “The Blockinator”?

So totally worth it to make the time. Ollie has come out huge and I’m glad, it gives the gradient colourway lots of room to be appreciated and look at all those nupps!

Loved this project. Janine is a whiz with lace patterns and I am totally smitten with the Unique Sheep’s Luxe base.

The beads are lit up with natural daylight. Their colour is a deep ruby – S/L ruby AB’s for my bead people. The Elle Rae yarn is a deep rich black that has a lovely sheen. Love this project like crazy and I think I may have become a blocking convert! 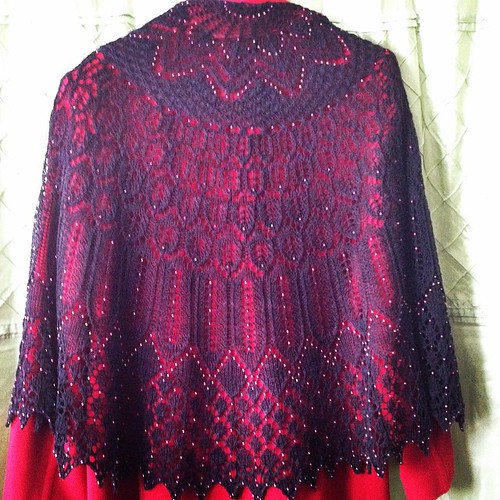 My first born’s birthday is today and even more auspicious that it falls on 2014’s Autumn Equinox.

Some of you already know that I have a poetry blog here on WordPress. Here is a link to my Cinquain-style poem celebrating the turn of the wheel:

(Fair warning should you decide to venture beyond that post; there is some mature content and raucous rock music placed there.)

Carrying that theme through to the knitting, this lovely pattern, in kit form from Earthfaire, showed up in my inbox this morning:

Hydref Scarf by Abigail Phelps. The photo below is a detail picture showing this lovely, leafy design worked in the perfect Autumn shades:

I sense another Abigail project is in my future. Her “Addewid” was a joy to knit. (Still need to block for a proper Show & Tell).

You can find the kits here at Earthfaire.