James Harris, it was love from the first moment you appeared in my thoughts to finally tying the knot!

Okay. Enough silliness :p The inspiration for this first in the series is my Great Grandpa Thorpe. He was a well-known ship builder and craftsman but to me, he was hugs, yarns – of the story variety, salt, ocean, family love and pride. It seemed fitting to work this as a traditional seaman’s scarf, a shape that is really wearable and unisex.

JH – the test knit is done and I think he’s a keeper. I’ll be over here in my corner trying to decipher notes and getting this one ready for editing.

The “Boys” hanging out 😉

The Huntley Launch. This is one of my Great Grandpa’s schooners.

I think I’ve used that one before 🙂

So… James Harris – the test knit edition is done and I think I’m good-to-go for the pattern write. I like this one and am looking forward to the second in the series, Carey Judson. There’s some Three Irish Girls yarn winging its way here for that project 🙂

I gave in to my psych-out and started the Matinée II – small edition (Mystic Topaz) in some reclaimed Noro Kureyon Sock. I was exploring using some double knitting techniques for this but it’s so easy to do and my hope is that adventurous beginners as well as more experienced knitters will want to make this when it’s released… and not soon enough. I may need to start offering bribes for Test Knitters!

On the “been there, done that” front, I’m including an FO picture from a Raveller who just finished up a beautiful, gradient version of my “Carré Glace” pattern. I will never stop being excited anytime someone chooses to make a KeiB Designs pattern 😀

The “Boys” hanging out 😉

Two thirds of the JH test knit is it! I do like seeing how different yarn selections change the look of one pattern. This one, in Cash Iroha, has very precise stitch definition but a much more rustic feel. Four more of these and I’ll have Yule / Christmas covered for all the menfolk in my family 🙂 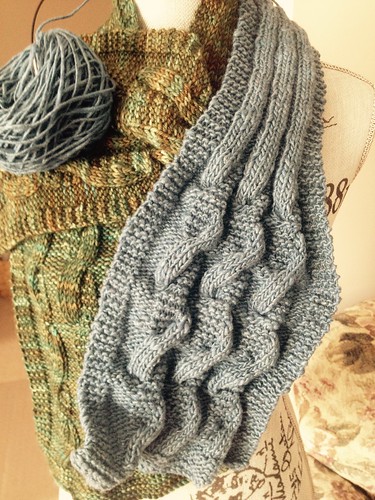 I had some fantastic news and I hope it’ll go through, either way it’s a compliment and so encouraging. I’ve been approached to have one of my patterns taught as a class 🙂 I’m so happy about the potential this has and if it comes to fruition, I’ll share the details here for any who might like to participate.

Cheers all! Have a great weekend 🙂

It’s all about the WIP’s this week I’m afraid. I’ve done it to myself with this damn “startitis” and lack of sufficient pairs of arms. I finished the prototype for “James Harris” and am currently working the test knit from my draft pattern. Savannah is my “selfish knitter” and “Reign” accompaniment, so not a lot done but progressing. I keep on staring at the yarn for the test knit of Matinée II (the Mrs. Crosby) but I’ve psyched myself out with the technique I want to use v. practical application / joy of the knitting / fear of buggering up the most gorgeous yarn evah! I suppose a dip in the frog pond wouldn’t be the end of the world if things… unravel…

Progesses and lilacs from my walk to the Marché: