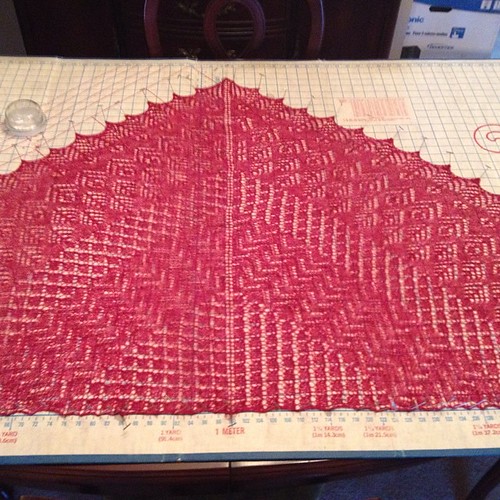 One of the most appropriate Yarn Bombs I’ve seen 🙂

A yarn bomb of the Jim Henson and Kermit the Frog memorial.

Please click the photo for the story and the charity link for RAOK.

Photo and yarn bomb by Nikki Smalls (via Twitter)

You’ll have to pry my pins from my cold dead hands!!

I may have to break up with you.

Like a Bad Boy boyfriend, you tempt me with your charm and good looks and every time I break down and take you back, you behave for a while and then wham! You let me down.

I’ve put up with three (or more!) knots in one $12.00 skein and your random bits of orange that show up in my pink colourways. I think I’ve been very tolerant of the bits of floor sweepings and the slivers caused by random bits of wood and sticks, even the ones that made me bleed and cuss. Really Noro, really?

Your new thing is to just break randomly as I am throwing you over a needle?

You, Bad Boy, have tested my limits. There are other variagated yarns you know and they would be happy to have my sexy Karbonz running through them!

So. Best behave through the rest of the knitting on these mitts are I’ll be turfing you into the bin and no amount of silk, mohair blandishment will convince me otherwi… Ooh, pretty colours…

As mentioned earlier here is a link to one of our local farms participating in “National Alpaca Farm Days“.

Silent Valley Alpaca was also at the Almonte Fibre Festival that I attended a couple weeks ago.

Did I mention I love alpaca?

Today is a gorgeous, sunny autumn day for a drive. Anyone local should go out for a visit!

Nothing messes up your Friday post as badly as getting to the end of it and realizing… Dang! It’s Thursday.

You want to do what with my wool?

Happy to let you know that the Ravelry group for KB Designs is now live. I hope to see some of you there.

The Almonte Fibre Festival was on this past weekend and I was happily in attendance there this afternoon with my BFF, Francine and a few other friends that we bumped into or who there as vendors.

This was my first visit to a fibre festival – time and distance often being a mitigating factor in whether I could go –  now that I’ve had a chance to, I’ll be trying to get to as many as I can!

The day was perfect, sunshine and warm with the temperature being in the mid-20’s. Almonte is about a half hour drive from where we live and is a quaint and historic little town with much to offer tourists in general but also folks looking for art and artisans.

Previously held in the twinned locations of the well known Mississippi Valley Textile Museum and the North Lanark Agricultural Hall, the Festival was held under one roof at the local arena. We were greeted by four alpacas from a local farm. Another first for me as I’ve knit a lot of alpaca but hadn’t seen one “in person”. They are adorable! Unbelievably soft and good natured, unlike their camelid relations the llamas and camels. Oh Henry and Megatron were great ambassadors and greeters.

Venturing inside, we found so many vendors I was a little overwhelmed. The layout was good and there were lots of people in attendance but not cheek-by-jowl (which would have sent this introvert into a a skeeved-out state). We had bumped into some knitting friends and with them, did a quick walkabout to get a peek at as much as we could and also to plan our purchasing path for later in the afternoon. Vintage clothing upstairs and the Button Collectors Guild rounded out the themed areas. I can see how people get caught up in button collecting now and I don’t think I’ll ever put readily available commercial buttons on a handknit again! Cards and cards of buttons, vintage and more modern, beautifully uncommon. I bought a card for a future sweater that is still just some skeins and an idea.

There was quilting, smocking, spinning, rug hooking, knitting, crochet, beading, felting, Nuno felting, textile art and all the supplies that you might wish to stash enhance or learn a new skill. Against my better judgement, I purchased a drop spindle kit… I swore I wouldn’t do it because I know this will inevitably lead to a stash of fibre braids and batts; I suppose there are worse addictions though. My BFF had her lovely shawl pins ~ Fancy That Creations by Francine ~ for sale alongside another friend, Genevieve, the colour maven behind Turtlepurl Yarns and so there was a bit of stash enhancing that went on – I’m sure there is one more nook in the work room that needs filling!

A visit to the tea room for sandwiches and a regroup before a second round of shopping, ogling, squishing and yarn sniffing; was a nice break. The festival closed at four in the afternoon and after the takedown of displays and with my wallet much thinner than before, we headed for home.

A perfect afternoon, a perfect September day, spent in the best of company and colleagues. Golden.

I would have liked to take more photos but there was just so much to look at. Here are a few from the day and with the Yarn Pr0n photos to follow in a day or two:

Oh Henry was a bit of a diva.