I’m in the middle of several projects as always. I don’t get people who don’t have WIP’s – you know, like six or thirteen of them :p

I’m working at my second Filigree scarf in that glorious, reclaimed Camelspin. No deadline for this, so I just pick it up when I need a break. I’ve also begun the borders for my Log Cabin In The Silk Garden. The Lett Lopi I had ordered never came from the first company and I wound up ordering it direct from Iceland. Would you believe it was half the price?! It showed up a few weeks ago and I’m making time for it in between other things.

I did complete another Yorick Cowl. This one made entirely to my draft pattern and I’m super happy with it. I’ve tweaked the join at the centre back neck and am debating releasing this a little closer to All Hallows. In the meantime, that project and another Yorick are destined for my Etsy shop as “ready to ship” items. Slow but sure, I’m restocking the shop, it’s a challenge to keep up with the blogging, FB’ing, etc. and still find time to knit!

The design bug is always biting hard and on that front, the next in my men’s scarves is pencilled down. At the moment, I’m seeing it as a fully crocheted project and I’ve found some scrummy SweetGeorgia silk merino aran to play with the concept. I’ve also started the prototype for another ©Kindred Knits & Cohabiting Crochet design. This is a scarf with a nod to Japanese motifs and aesthetics, also with my favourite (dare I say signature?) design feature for combining widely differing yarns into one piece. I’m liking how it’s working up so far and always love to see a little more stash being busted.

I better get at it, the day is calling and one more quick coffee to power up.

Yorick I ~ available in Etsy shop

All squares finished and ready for borders: 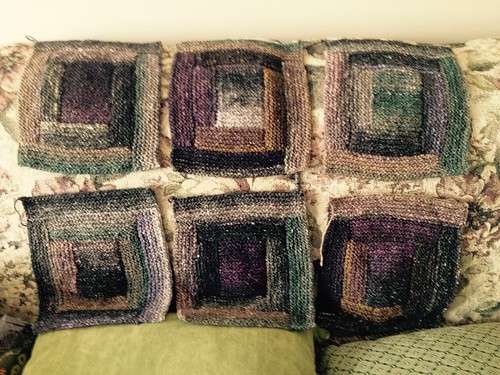 These are the first six and from my bag of 10 skeins (Colour 243 B), I was able to get 12 squares with some leftover for mending.

And a couple more, seeing’s as I just realized I shared the above photo and am too lazy to take it out :p : 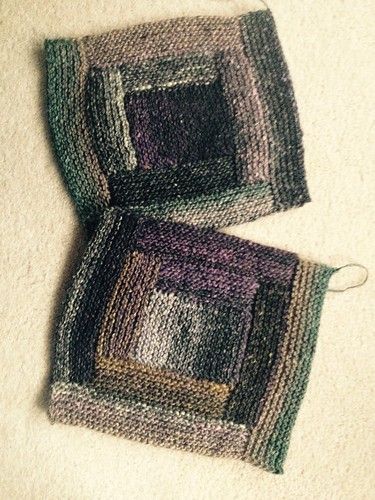 What a happy making project! As portable as socks, no thinking just keeping my hands busy – something as essential as breathing for me. My GF had made a similar type of blanket and chose Lett Lopi for her borders, I’m following that lead after checking it out on line. It looks to have a similar hand and appearance when knit to the Noro Silk Garden. I went with a colour called “Black Heather”. It has the traditional look of a black border but I think will be a little less harsh in contrast to the blocks. Unfortunately, it’s backordered for 2-3 weeks but I think I can find something to keep me busy 😉
My Harmonia’s Rings sweater is still in the works, it needs just the bottom band and the sleeves are almost complete, just debating full or elbow length sleeves and because I’m me… I started another sweater. With cleaning, organizing and donating, I’m finding some lovely yarn that I’d forgotten about. A bag of Elann’s Highland Silk looked a great fit to make a new version of one of my favourite sweaters. No photos yet, I’m just working the bottom rib of this generous sized, turtleneck pullover. The first version was made when I was pregnant with my son and has survived many years and even machine washing since. Week’s end should bring a progress photo to share 🙂

Shopping the stash yielded up this ancient Noro Silk Garden and it seemed a good fit to try a log cabin-style afghan. I had a bag of 10 skeins and am working my eighth block as I post (and make some lunch). This is amazingly easy to memorize, a perfect commute or telly watching project. With the few metres left after each block, I should be able to knit 12 comfortable and then will look for a complimentary yarn to work the borders.