To celebrate the end of the flood recovery, I’m having a “Downsize The Deductible” sale at KeiB Designs and Knits on Etsy. Take 10% off any item in the shop from today until 23 July! 📦🎁🔖🤗

Lot’s of new yarns that are perfect for the cold months ahead and for little luxury gifts of knitting.

New in store: Madelinetosh Tosh Worsted, Noro Silk Garden Aran – several colours and Sundara Merino Worsted. Lots of knitted goods too for those who don’t knit but love to give unique and exclusive gifts 🙂

The Wollmeise has got to go. Details provided at the Ravely links beneath each photo.

On my Ravelry, I offer to pay 1/2 of the calculated shipping cost for any three skeins purchased at one time. I will pay the full cost for shipping if one crazy person buys all four skeins at once to USA or CDN addresses (e-transfer preferred or Paypal)

More yarn than you need? Split with a friend 🙂

Five skeins (one double) of gorgeous citrus shades at an “In Season” deal.

On my Ravelry, I offer to pay 1/2 of the calculated shipping cost for any three skeins purchased at one time. I will pay the full cost for shipping of this crate of sunshine to USA or CDN addresses (e-transfer preferred or Paypal)

$180.00US, shipping included for some very rare and unique yarns. That’s enough Vitamin C & D to keep you going all winter long!

More yarn than you need? Split with a friend 🙂

I Love You Cupcake!

I saw the first of them.

Those harbingers of doom – the annoying people who start posting about it being halfway through the year and “better start planning for Christmas”. Don’t even get me started on “Back To School” being in the shops already. What happened to enjoying the moment?!

I didn’t start it but it brought to mind that yes, I will be crafting for people and I suspect some of you may be too. So, I thought that I’d mention that I’ve been updating yarns for sale on my Ravelry stash tab – yes, still unpacking and organizing. There is lots new including: much sought after limited edition colours, discontinued and out of business Indie sock yarn, Socks That Rock!, Rowan yarns – several that are discontinued, cashmere, alpaca, Lucky Lurker “Duets” sock yarns and some Vegan-friendly skeins too. Tons more in a range of weights. I recently began an offer to pay half of the shipping cost on any purchase of three (3) skeins, this doesn’t include purchases that are sold as lots.

I also have some handspun yarns, tools, books and patterns available at my Etsy shop and for those who don’t knit or are pressed for time this year, I have several finished knit and crochet items in the Etsy shop.

Now if that doesn’t jingle your bells in July, I’m sure this will!

My poor Etsy shop is sadly neglected at times but in the interest of getting things back on track, I’m having a wee sale and this is a preview: 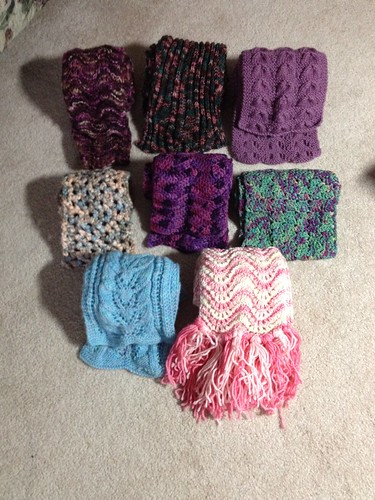 Feel free to message if anything catches your eye, this will be a coming weekend project, time permitting 🙂